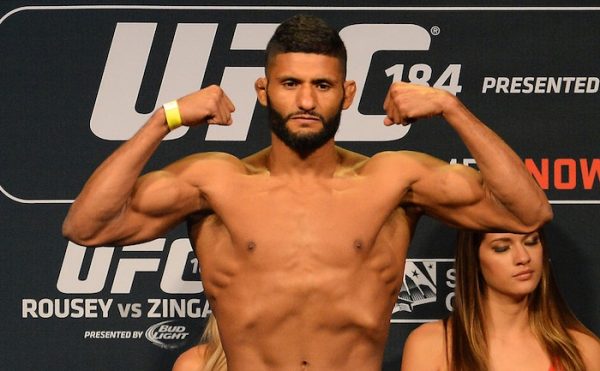 Ultimate Fighter 19 finalist Dhiego Lima will be making his Titan FC debut next month in Coral Gables, Florida at Titan FC 39 as he will be facing fellow former UFC fighter David Michaud in a title eliminator fight in the welterweight division.

Lima (11-4) is coming off a decision win against Antonio Trocoli at Legacy FC 54 last month and the victory snapped a two fight losing streak. Following that victory, Lima began to look for his next fight and it became tough for him to get a fight before talking to Titan FC. He explained what he went through during this past past Thursday’s edition of “The MMA Report Podcast” and stated he was thankful to Titan FC CEO Jeff Aronson for believing in him.

“I don’t know what happened. I had such a bad taste in my mouth because of that,” Lima stated. “That’s why I have to get back there. Those four fights [UFC], I did not do anything. I look at those fights now and go, ‘who is that guy?’ Like I don’t even know that Dhiego. I guess the pressure got to me. I guess I was not ready. Who knows. There is so much stuff that goes into it. I was just happy being there [UFC] and you can’t treat it like that. That killed my stock.”

“Because in MMA, they look at your past four fights,” he continued. “If you look at my past four, not counting my Legacy. You look and I am 1-3 in my last four fights and all three of those losses are TKO losses. So I understand where they are coming from. The difference with Titan is he [Aronson] believes in me. I talked to Jeff and he said I know your skill. I know who you train with and I have talked to guys who train with you. They say you are a monster and that’s it. They believe in me and they gave me a shot. You guys are now going to see why they believe in me.”

Check out Lima’s complete interview from Thursday’s edition of “The MMA Report Podcast” below and be sure to subscribe to the show on iTunes and Stitcher.