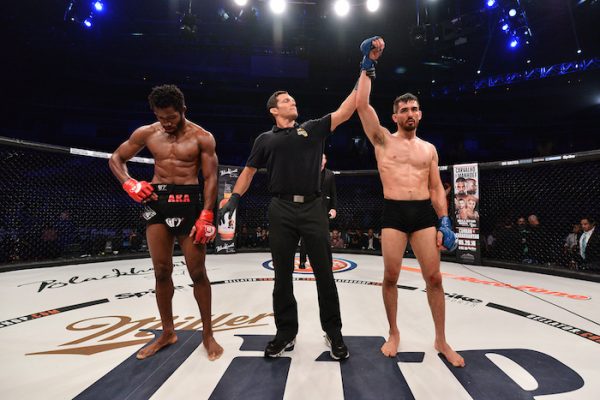 Three fights have been added to the preliminary card of Bellator 161 on September 16 including a featherweight bout between Mark Dickman and Daniel Pineda.

Bellator officials announced the fight bookings on Tuesday in a press release and the other two matchups announced were Kenya Miranda vs. Emily Ducote and Gregory Babene vs. Francisco France.

Bellator 161 will come from the H-E-B Center at Cedar Park, Texas and will be headlined by a heavyweight bout as Cheick Kongo meets Tony Johnson.

Dickman (11-2) has won back to back fights and defeated Thomas Diagne in his Bellator debut in May. Ten of his eleven victories have come by stoppage and seven of those wins have come by TKO/KO. Pineda (21-12) is coming off a split decision defeat in February against Emmanuel Sanchez at Bellator 149 and the defeat snapped a three fight winning streak. Five of his twelve defeats have come by decision and all of his pro victories are by stoppage.

Miranda (2-2) is coming off a submission win in September of last year against Natalia Cristina Miranda Silva at Ratinho Fighting Championship 4. Both of her pro wins have come by stoppage and she has alternated wins and losses since making her pro debut in 2014. Ducote (3-1) won her Bellator debut in July against Bruna Vargas by submission. She has won three in a row since dropping her pro debut last year and her other two victories have come by decision.

Babene (17-11, 1NC) has won back to back fights and five of his last six. He is coming off a submission win against Brandon Farran in February at Bellator 150 and his last four wins have come by submission. France (13-4-1) made his Bellator debut last year and has gone 1-1 in the promotion. He will enter this fight following a defeat as he lost to Kendall Grove at Bellator 150.