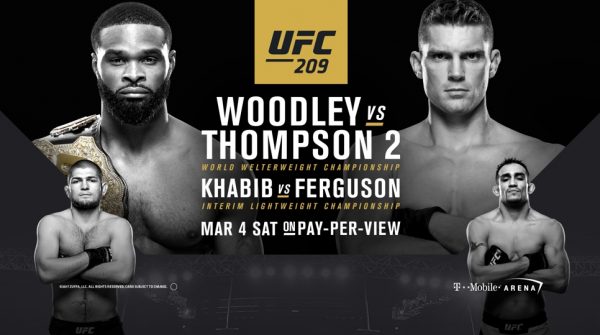 UFC 209 took place this past Saturday night at the T-Mobile Arena in Las Vegas and the main card on pay-per-view was headlined by Tyron Woodley retaining the UFC welterweight title with a majority decision over Stephen Thompson.

Prior to the main card on pay-per-view, the televised preliminary card aired on FS1 and featured come from behind wins by Darren Elkins and Iuri Alcantara. Elkins scored a stoppage victory in the third round against Mirsad Bektic after being dominated in the first and second round, while Alcantara submitted Luke Sanders in the second round by kneebar after losing the opening round.

In other rating notes for UFC 209:

The UFC will return to FS1 on Saturday for UFC Fight Night: Belfort vs. Gastelum from Brazil and calling the fights will be Jon Anik and Brian Stann.