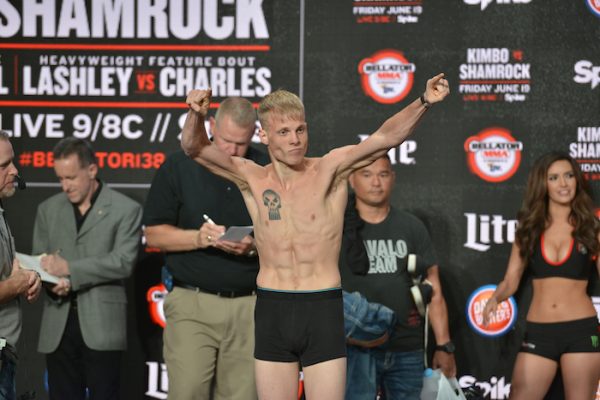 Jason Floyd is back with a new episode of The MMA Report Podcast and he kicks off this week’s episode by playing comments made by UFC welterweight champion Tyron Woodley about the fallout from his victory this past weekend against Stephen Thompson. Along with playing comments made by Woodley, Jason also plays two audio clips of UFC President Dana White talking about potential new weight classes and criticism of the UFC Fight Night 107 main event.

After talking about the comments made by Woodley and White, Jason talks about some of the latest news in mixed martial arts including a minor change to Saturday’s UFC Fight Night 106 and a key matchup that has been booked for May’s UFC 211 in Dallas.

Then, Jason has interviews with five fighters who have fights either this weekend or next weekend. First, Jason talks with Angel DeAnda about his rematch against Justin Baesman at Global Knockout 9 for the middleweight title. DeAnda explains why he accepted this rematch after beating Baesman in their first meeting and he explains what keeps his going in this sport. The next two interviews involve the two men that will be in the main event of Shamrock FC 285 on Saturday night as Garrett Mueller meets Steven Nguyen. Both fighters talk about what has been going on in their training camp and why they believe they will walk out of the cage on Saturday night at Shamrock FC 285 with a victory.

To wrap up the interview portion of the podcast, Jason is joined by two fighters that will be fighting next Saturday night. Damir Ferhatbegovic will preview his fight against Luis Pena at Valor Fights 41 and Devon Chavez will talk about his amateur title fight against Anthony Jimenez at 559 Fights. Finally, Jason will give you a quick preview of this weekend’s mixed martial arts fight card including Friday’s Legacy Fighting Alliance 6 and UFC Fight Night 106.