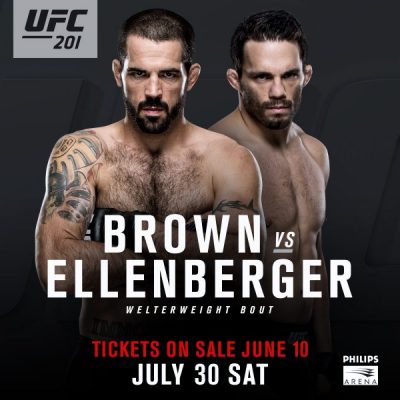 A welterweight bout has been officially announced for UFC 201 on July 30 in Atlanta as Matt Brown will look to get back on track when he meets Jake Ellenberger.

UFC 201 will come from the Phillips Arena on July 30 and the event will be headlined by a welterweight title fight as Robbie Lawler defends the UFC 170 pound title against Tyron Woodley.

Brown (20-14) is coming off a submission defeat against Demian Maia at UFC 198 and he is 1-3 in his last four fights. His only win in his last four fights came in July of last year against Tim Means as he won by guillotine choke submission in the opening round. Ellenberger (30-11) has dropped back to back fights and five of his last six. His most recent defeat came in January as he lost a decision against Tarec Saffiedine.