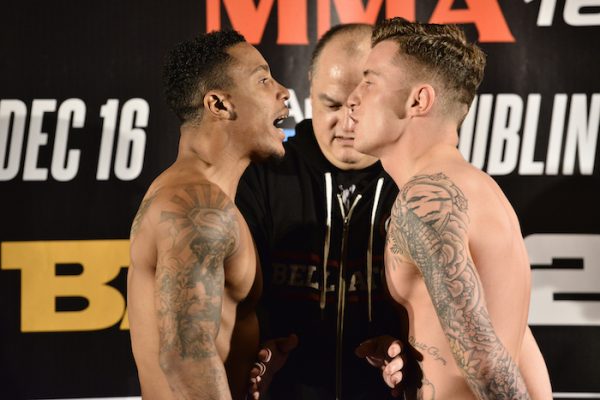 Bellator MMA will hold its final event of 2016 today in Dublin, Ireland and a potential star could be born in the co-main event of the fight card as James Gallagher looks to remain undefeated when he takes on Anthony Taylor at Bellator 169.

“What skills? There is none,” Gallagher stated on The MMA Report Podcast. “I don’t see any there. Nothing. Open his mouth. That is what he is. He is good for nothing. He is good for opening his mouth and that is about it. He is an absolute dope. That is what I think of him. He is the most cringiest person I have ever seen in my life. He is fake. He is not real. I’m real and I am going in there to cave his face in. And that is all that matters. I am not here to do all of these stupid interviews or get on TV or anything like that. I am here to cave his head in and I am here to achieve my dreams. I am going to send him packing. He is done. He is done after this.”

Shortly after I talked with Gallagher, I had to opportunity to speak with Taylor. Now this was the first time I had the chance to speak with Taylor and I walked away from the interview thinking: This guy gets it. While Taylor may only have two professional fights, he understands this business is much more than what you do in the cage. He clearly understands that fighters have to promote themselves to get people interested in their fights and after talking to him, he got me interested.

Now during our interview, I played Gallagher’s comments to Taylor and he gave me this response.

“There is nothing that I see that my teammates have not shown me that he can do,” he continued. “I know what I can do with this kid. He has not fought nobody like me. I have nothing to lose man. I have everything but to gain in this fight. So why would I come into this fight scared with no game plan? I have a game plan. He talks about how he has skills and all of that. He doesn’t have confidence in himself. Look at the fighters that they have set them up with. They have set him up with bums bro. He has not fought anybody. My very first fight was a guy like 5-1 and about to go to UFC. My record is better than all of the guys he fought. He has fought boys. He’s fought little boys. I am going to teach him a lesson.”

Heading into today’s Bellator 169, this is what I know. Gallagher is a top prospect for Bellator, but only time will tell if he can develop into a top fighter for them. Also, I know that before Gallagher signed with Bellator, his three opponents have a combined record of 2-6. When it comes to Taylor, I know he is coming off the 4th-fastest victory in Bellator featherweight division history and he clearly understands how you promote a fight.

Now I am not sure I can file this under what I know, but what I believe. When this fight was booked, I believe that most people looked at this fight as a showcase fight for Gallagher. Even I thought that. However, Taylor is looking to make this his showcase fight. He definitely has my attention and you can just about guarantee that he has the attention of Bellator president Scott Coker and Bellator matchmaker Rich Chou.